While highlighting the finest food and drink in the Triangle, I need to note that fine and fancy are not necessarily synonymous (as illustrated in my last post on Taqueria el Toro).  In fact, I would argue that with some cuisine types, the chef attempts to be too fancy and in the process, the food loses its magic–its integrity, its deliciousness.  It becomes something really pretty to look at and photograph, but let’s be real: presentation means nothing without flavor profile.  When in doubt, keep it simple and keep it fresh.  What I am highlighting today is not fancy, but it is absolutely f^%#ing delicious, and deserves a place in Come Eat With Me.  I have to give a shout out to Jes Lipson for bringing this spot to my attention.  Thanks, Jes.

Plaza Cafe is located at 410 Fayetteville St. across from the Sheraton.  It’s a low key deli that serves breakfast and lunch.  It had never caught my attention before now.  But, on Wednesday and Friday during lunch service, they have an authentic Indian street food pop up.  Here’s the thing about Indian food around here: it’s scarce. You can go to Cary to Chatham Square and there are a few spots.  I have been to Udupi Cafe out there for lunch and had some decent food but something about buffet food that makes me wonder if it is just a never-ending pot of something they keep adding to and am I now eating 3 week old korma?  Call me a snob. There’s also something about everyone who walks by it potentially breathing on the food as they are serving themselves, etc.  Not a knock against Udupi, I’m just not a fan of buffets.  So unfortunately, I never really eat much Indian food because I tend to hang ITB and there isn’t much to offer in the way of Indian food ITB.  But now, I know one of the best kept secrets in downtown Raleigh.

I went there for the first time with some of my colleagues for lunch on Friday.  Since it is a street food pop up, their Indian menu offerings are different each time.  During my first time, they had momos and samosas.  You could get your momo stuffed with beef, chicken, paneer, or veggies.  Momo are actually native to Nepal, and they’re little flour dumplings stuffed with the aforementioned.  I went with the paneer momo.  Paneer is basically Indian cottage cheese.  I love cottage cheese.  My Mom has told me stories of her diet habits while she was pregnant with me.  She actually worked at Carteret General Hospital during her pregnancy, and claims to have eaten a pear and cottage cheese salad from the cafeteria nearly every day.  That may have something to do with my obsession with cottage cheese.  She also admits to consuming an entire Mrs. Smith’s apple pie (a la mode of course) per week during the full term of her pregnancy.  We can save the apple pie a la mode discussion for another time. 😉 OK, back to paneer momo.  It was served with a red chutney pepper sauce that was kind of sweet, then with another green chutney, then I asked them to add the yoghurt. When given the choice, I never skip a yoghurt sauce.  This was plain, not raita.  Although, I absolutely love raita and could probably drink it.  Think of tzatziki if you’re not familiar with raita. One thing I will say about the people of India: they make the most brilliant use of the things when it comes to sauces.  Absolutely brilliant.  This green chutney sauce on the momo was super fresh and minty.  Now that I think of it, I could probably drink that, too.  Then they served it with a soybean paste on the side with basmati rice. My eyes were big and I was so hungry so I also got a veggie samosa on the side.  O.M.G.  That veggie samosa.  Dammit.  I need one right now.  It was PERFECT.  Best samosa ever.  It felt like someone’s Indian Grandma was back there.  I want to take her home and eat samosas every day.  Then we would have to workout together.  I think they also had beef or chicken samosas, but I got the veggie.  Samosas are usually filled with mashed boiled potato, onions, green peas, spices and green chili or fruits.  I think Samosas fit perfectly in the Southeastern U.S. considering how much we love to fry something.  It melted in my mouth and was perfumed beautifully with spices.

I told my Sister, Laura, about this place when we hung out on Friday night and she responded, “oh yeah, the Indian pop up on Wednesdays at City Plaza.  That’s my shit.”  She’s been holding out!  She was happy to hear that the pop up is also on Fridays.  I am going to have to invite her next time to join me and my Real Magic crew.  I am already dreaming of what tasty homemade Indian yumminess will be there next week…  Hit me up and come with! 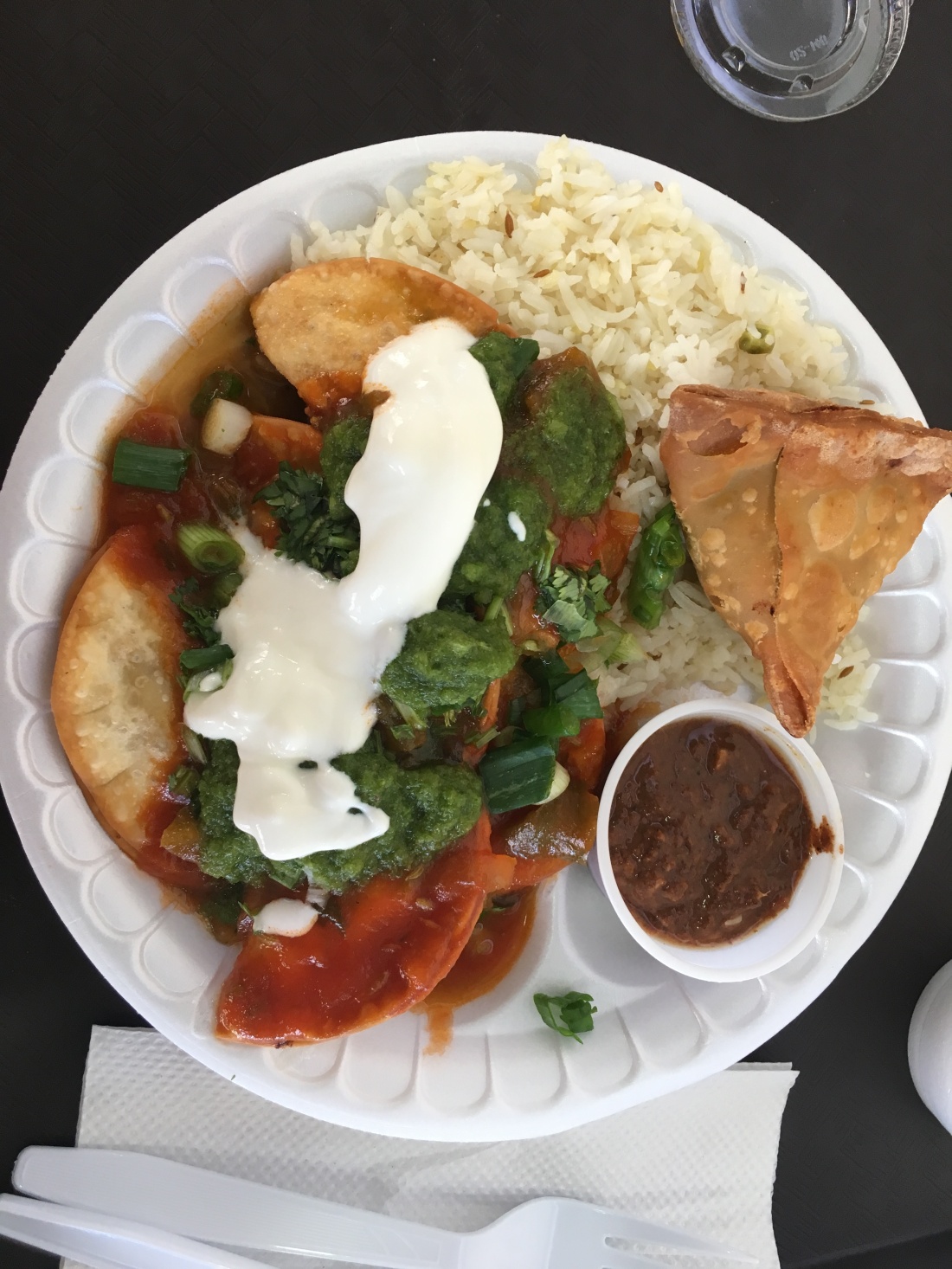 One thought on “Indian street food pop up in DTR!”